Do you know there are 4 crazy guys that want to create an alternative to Facebook? 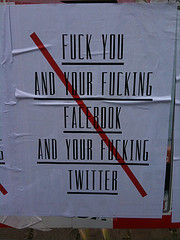 "Fuck you" by Tim Pritlove (CC BY)

Well, after a summer of coding last day a first developer version was released, sure it’s not perfect but it’s a start.

A sentence can give you an hint about the main design difference between Facebook and Diaspora “We live our real lives in context [...]  Social tools should work the same way.”, I agree, but I don’t know if Diaspora will give users the control, I hope so. For the moment the paranoid in me say “put less personal stuff possible on internet”. 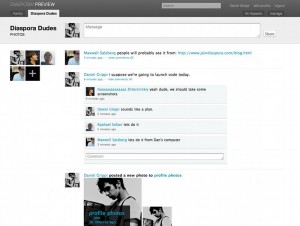 From the technical point of view is a Ruby on Rails application, I’m sure this has many pros but how someone said the choice of RoR leave the cheap hosting out of the game.

In my opinion BTW this is not a fail because if an application is well written it will succeed and if they want to compete with a giant like Facebook they have to do the best they can, no matter if it will not be installable on every webserver.

Time to start the diaspora?

This release is just the start, the code is not yet ready but I like the fact the code is public and everyone can collaborate, there is a bug tracker, mailing lists and even a way to make feature requests, all seems in place and I like the licence too (GNU Affero GPL), the only thing that not convince me is the “Diaspora Inc. Contributor Agreement”…risky?

The diaspora will not start today but I wish these guys good luck (and of course I hope they will not close the code someday)!

UPDATE (2010/09/18) : You can already test Diaspora here, I have to say the state of things is impressive considering the code was developed in just few months!